I mentioned in an earlier post why I like to do my training hikes from the Cobb Estate in winter. Like any area with numerous interconnected trails, the number of people one sees gets significantly smaller as the distance to get to a spot increases. In the case of the numerous spots reachable by day hiking from the Cobb Estate, the first two most people attempt to reach are Echo Mountain, and Inspiration Point. On weekends the hike to Echo Mountain is packed, but at Inspiration Point, there are usually only a few people. So, it’s easy to strike up a conversation. After hiking to Muir Peak last winter–which is only about 0.7 miles east of Inspiration Point, I’ve started asking people if they have hiked to the peak. Nobody has told me yes yet–which I find unfortunate. To be fair, Muir Peak is not labeled on most maps, others have it improperly placed to the west of Inspiration Point, and I haven’t yet seen any map that shows the Muir Peak Trail.

View toward Mt. Lowe from Muir Peak. (click to enlarge)

Part of my hike last Sunday included reaching the summit of Muir Peak. After having another four conversations where nobody had visited the Peak, I decided to finally add this hike to my blog (which is more direct than my Sunday hike that included Mt. Lowe). 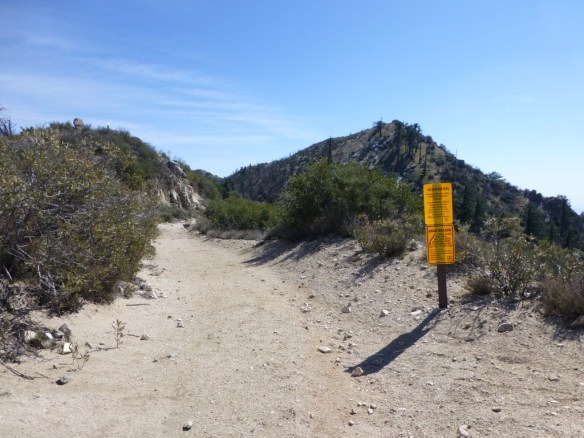 View from Inspiration Point down the One Man & Mule Railway Trail and toward the West Bump of Muir Peak.

While Inspiration Point has a great view, being located in a saddle results in it having blocked views east and west. Also, from Inspiration Point, Mt. Lowe is close by and blocks views of Mt. Markham and San Gabriel Peak. It is worth the effort to make the trek to Muir Peak and its 360 degree views far enough from higher peaks to take them in fully, and its better vantage point to see the city below.

View along the One Man & Mule Railway Trail.

The Muir Peak Trailhead is reached after a short half mile walk on The O.M. &M. Railway Trail. The first time I hiked it I was surprised to find such a well-maintained trail. There is a small sign on the trailhead marker reading “This trail reconstructed by volunteers from the J.P.L. Hiking Club” (now known as JPL Hiking +). I appreciate their efforts as the short trail to the summit is in great shape and offers a nice variety of views.

View toward Mt. Wilson from the Muir Peak Trail.

You are likely to have this peak to yourself–even on weekends. 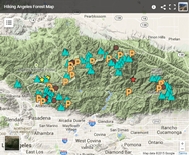