A number of trails lead from Tom Sloan Saddle.  Take the unmarked Hiker’s trail heading up south and west around the Manzanita.

For the most part, the trail will follow the ridge. As the trail isn’t maintained regularly, there are stretches where some people will view the path as a somewhat sketchy.

Following the ridge, there are several small saddles with associated fairly steep parts. The most difficult to pass (shown below) requires (at least for me) some forethought to ascend. The easiest path is shown in red, the white portion is how the trail will lead you until it disappears, and the green portion was my first attempt that was far more difficult to traverse than the red path. Best to go straight up and use the large rock outcrop as a guide from which to stay close to and to the left of.

Paths up steepest part of Brown Mountain use trail. Red is easiest. 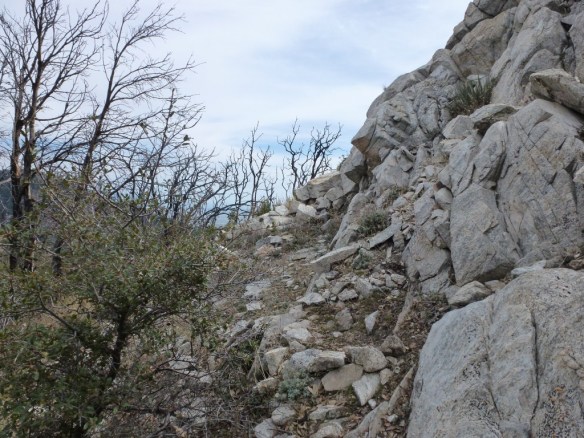 View of where the Brown Mountain use trail temporarily disappears and a better angle to get a sense of the steepness of the path leading upward to the right.

View toward Brown Mountain from the top of the steepest part of the trail (one of the three false summits).

The rest of the way has some more steep portions, but, they are obvious how to navigate.