I didn’t need my alarm to wake me up in time to be ready for our early morning ascent of Mt. Whitney.  The key remaining downside to needing to change my campsite location was that the only viable option at the time was close to the trail.  By around 1:00 am and within most every 30 minutes thereafter, I would awaken to the light of headlamps shining through my tarp, the sound of footsteps, and conversations (some quieter than others) from hikers who were off to an earlier start than me.  Fortunately, when I got out of my sleeping bag and tarp to begin getting ready to meet the rest of the group I discovered that it wasn’t as cold outside as I feared it would be.  By around 3:30 am we were on our way.

The hike up from Trail Camp to Trail Crest in the dark was among the best hiking experiences I’ve had.  While it was cold enough for me to really need my gloves, I was bundled up appropriately to feel comfortable.  The sky was now completely clear of clouds and wonderfully lit up by starlight.  However, without moonlight, it was very dark at ground level.  Initially, the dark blue of the sky was only discernible as blue when juxtaposed with the black forms of the mountains.  Aside from the subtle line delineating the black outline of the mountain tops meeting the dark blue sky; the only thing discernible from Trail Camp looking up or down the mountain was the light shining from the headlamps of hikers making their way upward.  Early on in our ascent of the 99 switchbacks we began crossing a stream of water back and forth as we made our way up the mountain.  For me, that was much better than dealing with ice and it made me hopeful our ascent might not require us to contend with an icy trail.  When the moon came out, it looked like an eclipse.  A tiny sliver of yellowish light shined out from the left edge of the moon (looking as if it were on fire) with the dark remainder of it easily distinguishable as a black circle against the dark blue sky.  We all stopped numerous times on the way up to admire it.

Soon after our first sighting of the moon, we started to see the light shining from headlamps that were coming down the mountain.  As hikers passed us, we learned that they turned back essentially due to it being dark with ice on the trail.  Although this wasn’t a good sign, other bits of information kept me hopeful it would work out for us.  For example, some hikers felt they couldn’t go forward because they didn’t have trekking poles which everyone in our group had.  Some hikers came down while others in their group continued up toward Mt. Whitney.  So, at least some people weren’t turning back.  This was now one set of switchbacks that I wanted to last a long time—at least until the sun was out to hopefully soften up the ice and help me easily see the ground before me.  Our timing was fantastic.  The sun began to rise just as we made the turn onto the last switchback.  Reaching Trail Crest shortly after sunrise was remarkable.  The grandeur of its expansive view was heightened by the previous hours of hiking in darkness (only being about ten minutes without using my headlamp) and most of the journey the day before looking up in anticipation of looking over the crest.

The journey from Trail Crest to the Mt. Whitney summit approach was stunningly scenic but also slow going.  The slowness was due to the presence of snow and ice on the narrow trail with a huge drop to the west side.  There wasn’t enough snow and ice to require crampons, but there was enough of it to require intense focus to not slip off the trail—at least at my skill level.  Fortunately, I experienced hiking in similarly icy trail conditions earlier in the year and learned what to look for having fallen a few times on far less hazardous terrain. To remain within my comfort zone, I needed to stop in order to take in the incredibly expansive view.  At times dazzled by the splendor; I would stop, take off my gloves, and snap a photo. 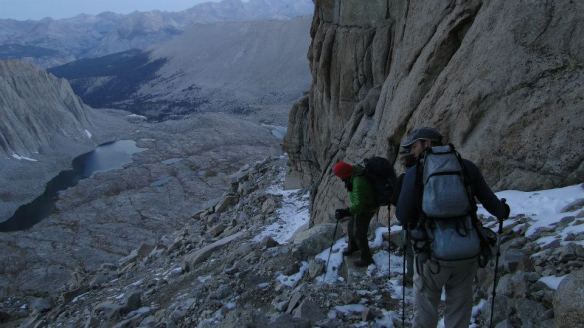 Early on, while the sun was still low to the east; the shadow cast by Mt. Muir, the rock towers, and Mt. Whitney emphasized the height of the mountain range in relation to the grand landscape to the west below—the direct light from the sun shinning on the ground when making contact with the Kaweah Peak Ridge and the Great Western Divide beyond. 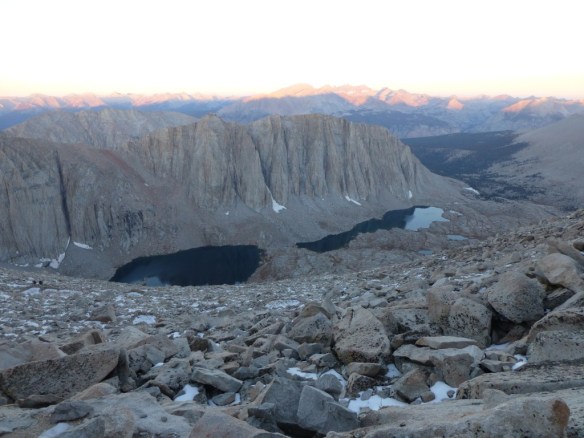 Looking down at Hitchcock Lakes and Mt. Hitchcock with the sun shining on the Kaweah Peaks Ridge and the Great Western Divide beyond.

Looking east through one of the “windows.”

Still a bit cold (perhaps colder that the 32 degree reading on the thermometer at Trail Crest), and hiking in shadow made crossing the windows (gaps in the rock allowing fantastic views east) more intense as the brightness and warmth of the sun had an opening to break through.

Any concerns about coming to a spot where the ice and snow would cause me to turn back vanished when the path of the trail transitioned from being on the side of the mountain to on top of it.  The final trek up to the summit—as I described in an earlier post—was spectacular.

With the sun high in the sky and the temperature rising, the ice and snow on the trail began to soften and melt making it significantly easier to hike.  Requiring a little less focus to traverse than was the case on the ascent, I was freed up to take in more of the view and snap more photos.

View heading back along the trail towards Trail Crest.

The importance of starting early was underscored further for me on the way down the 99 switchbacks because the trek down was helped by having views unseen in the dark on the way up.  This provided a profoundly different experience.

As I headed down from Trail Camp, I knew the really intense and new experiences of this trip were behind me.  All that was left to do was retrace my steps of the day before under similar weather conditions.  I was a little anxious to get down the trail as I worried about how tired I would become still needing to make the long drive home.  Not having much sleep the previous two nights, I was more tired than I expected to be and the way down felt much longer than the way up—especially from Lone Pine Lake to the trailhead.  The ride home went faster than I expected because there was so much to reflect upon.  After my year and eight month journey training and getting my weight down, the trip somehow far exceeded my expectations.  By the time I made it home I was already thinking about going back.  Tired as I was, I couldn’t even wait until the next day to look at my photos.  I pulled the book Mt. Whitney: The Complete Trailhead-to-Summit Guide by Paul Richins off my book shelf and looked at other ways to get to Mt. Whitney.  I’ll definitely be going back!