In the time it took us (my friends Karl, Valery, and I) to hike about a mile and a half from Mt. Hawkins to Throop Peak, a small fire had started on Kratka Ridge. The fire was small enough and far enough away from us that we were never in any danger. However, the reality that another fire was burning more of Angeles National Forest was a demoralizing sight for me. With just enough smoke rising into the air to make the forest between Mt. Waterman and Throop Peak feel genuinely vulnerable, I felt a deep sense of urgency to see firefighters actively engaged in putting the fire out. 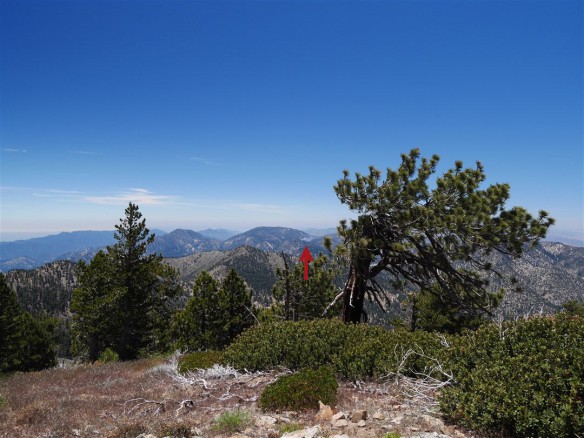 View from Throop Peak of the fire just getting started.

Until recently, I would have needed to wait until I saw planes or helicopters to know the fire was known by those who could do something about it. Thankfully, I now have a device that enables me to both send and receive texts via satellite. So, I sent a text to my wife to report the fire. Much to my relief, she found out help was already on its way and was able to text me that information. Still, that process took over twenty minutes (in part because she was in Santa Barbara and needed to be patched through to the proper agency). Armed with that knowledge, I was significantly less anxious while waiting for the first planes to arrive. My new device had just earned its keep. 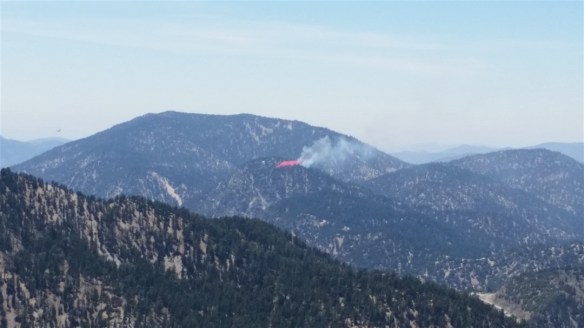 Zoom view of one of the first fire retardant drops (which landed on the fire) as seen from the Dawson Saddle Trail. Mt. Waterman looms high above in the background.

The aerial firefighters in the first planes appeared shortly after we had made it down Throop Ridge to the Dawson Saddle Trail. Fortunately, the fire hadn’t grown by much prior to their arrival. It was impressive to watch them time the drops so that the wind blew the retardant where it needed to be. After four drops, the planes were gone presumably to get more retardant. The fire was diminished some, but, more work was needed to put it out. 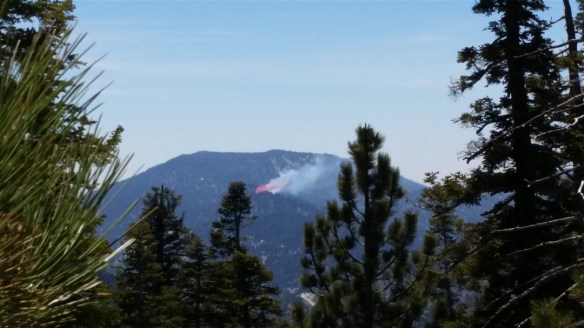 Zoom view of one of the second set of drops, as seen from the Dawson Saddle Trail, just before the trail led out of view of the fire.

Objectively, the aerial firefighters were back again quickly. While away, however, the fire began to slowly grow again and the clock ticked relentlessly. We saw two more drops make a positive difference before we followed the trail out of view to Dawson Saddle. Before reaching the trailhead, I spoke to a hiker who was just starting out for the day. He told me he had just driven up Angeles Crest Highway with no problems. So, I took that route home. At Islip Saddle, I saw that helicopters had joined the aerial firefighting team. Continuing down Angeles Crest Highway, Eagle’s Roost appeared relatively safe. Smoke from the fire appeared over Kratka Ridge just prior to my reaching Vista where Forest Service fire trucks were located. As far as I could tell, the fire appeared pretty well contained when I continued down the mountain. 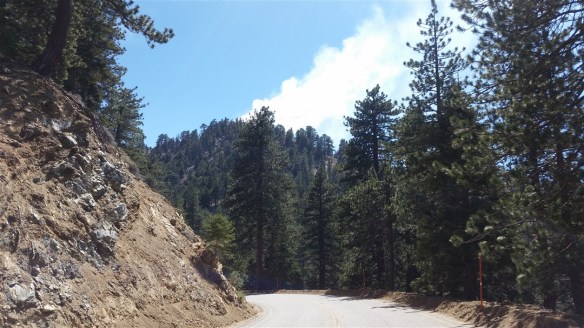 View of the fire coming over Kratka Ridge from Angeles Crest Highway before Vista.

I find it hard to get a true sense of where a fire is in the forest from most reports I read. With that in mind, I highlighted the approximate location in the track map below from a hike I did along Kratka Ridge in 2015. 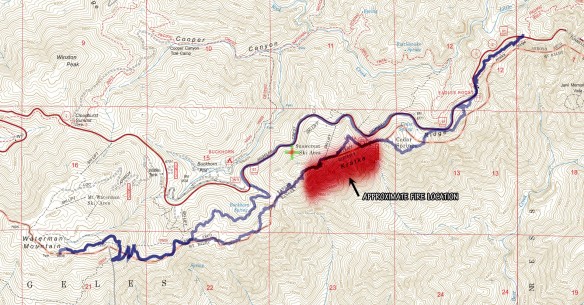 The fire appeared to be contained to the southern side of the ridge away from Angeles Crest Highway. Click on map to enlarge.