I first hiked the San Gabriel Peak Trail in December of 2011. At the trailhead was the standard yellow sign indicating that the trail went through a burn area. Given the condition of other burn areas in the forest I had hiked in prior to that day, I was pleasantly surprised by how green and shady the trail was before reaching the road leading to Mt. Disappointment. Between the last time I hiked this trail in February of 2013 and my hike last week, a lot has changed. 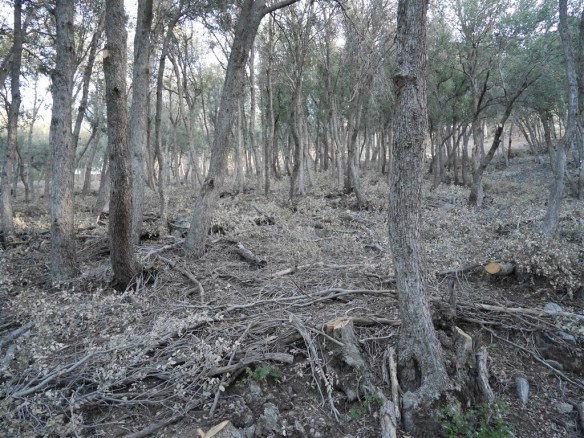 One of my first glimpses of significant tree cutting, pruning and trimming of the forest below San Gabriel Peak.

I came to this portion of the trail once again at the end of my hike that brought me to San Gabriel Peak by way of Mt. Wilson 1. When I reached the saddle between San Gabriel Peak and Mt. Disappointment I was surprised to see that all the burned trees along the road were removed. Surprise turned to astonishment as I hiked down the lower San Gabriel Peak Trail and found a remarkable amount of tree cutting, pruning and trimming of the forest whose remains formed a groundcover of dead vegetation as far as I could see. 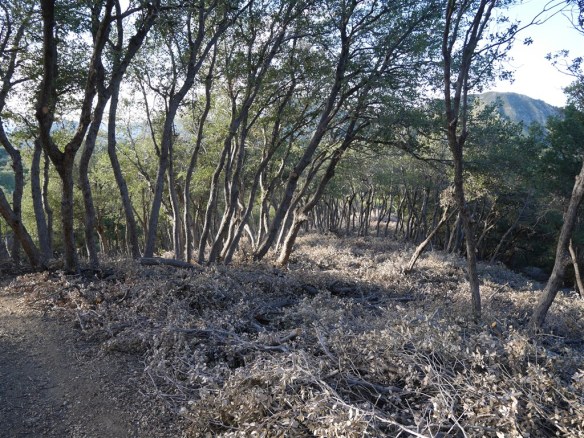 The remains of the “landscaping” yielded a ground cover of dead vegetation as far as I could see as I moved down the trail.

Each new turn in the trail provided another vista of this manicuring of the forest. I didn’t see anything dead that was left standing. As I looked closer, I noticed that no trees left standing had branches remaining below approximately ten feet in height. So, I believe a fair amount was trimmed that wasn’t dead. I was stunned by the scale of effort required to achieve this new reality in a forest so woefully underfunded that trail maintenance relies heavily on volunteer efforts. The resulting landscape feels out of place on many levels. I’ve never been in a forest “landscaped” like this before. I don’t have any information regarding why it was done and guessing does a disservice to the significant effort involved. As a result, I have no opinion regarding whether or not the forest should have been thinned out in this way.

With all branches cut below about ten feet in height, the trees feel manicured to a point more in line with being in a park or garden than a forest.

I share this simply because this trail is now a unique one (at least within Angeles National Forest) to walk through. It offers a trek between extremes of natural and man-made. The trimming and pruning make it feel more like a neighborhood park or garden than a forest, but the overall context and views feel like a forest. Views aren’t blocked by dense vegetation nor are they as open as the burn areas that were scorched to a point where virtually no leaves remain on any trees. There is a unique mixture of shade and view. The burned and/or dead vegetation forms a ground cover that is oddly uniform. The approximately ten-foot separation between the lowest branches and the forest floor feels somewhat architectural as if this space was built for humans, yet the spacing of the trees doesn’t feel that way. In short, this landscape is presently a mixture of odd juxtapositions with interesting characteristics.

A rare combination of shade and view created by the cutting of the lower limbs of all the trees still standing and the cutting down of the dead ones.

This experience highlighted for me the idea that those of us who are sharing our experiences in nature are also documenting the changes and developments that occur. With the current devastating California drought and the likelihood that climate change may forever change these places, I’ve decided to be more diligent in documenting the changes I’m noticing. I’ve added numerous additional photos to the existing photo gallery I have for this trail and I’ve added dates to the photos so anyone looking at them can track the changes. Over time, I’ll update all the photo galleries to this format and I’ll be more focused on adding new photos to existing galleries than I’ve been in the past.

1 thought on “The Newly Manicured Forest Below San Gabriel Peak”