Two weeks ago it snowed as low as 3,000 feet in Los Angeles. Last week temperatures got into the 90’s for a couple days (what happened to spring?). I hiked up to Mt. Lowe with Scott last Tuesday and saw no remains of snow on the north slopes. I realized that without another storm, I might only have one more chance to hike in snow this year. So, I drove up to Islip Saddle and hiked the Pacific Crest Trail to Mt. Islip on Sunday. There was no snow at the trailhead and at first I thought I was too late.

By a quarter mile into the hike snow appeared as I traveled on the north slopes. It was of the icy variety so I put on my microspikes.

Throughout the day the presence of snow was uneven. At times almost completely melted away.

At other times snow was abundant. However, it almost always had an icy feel to it. When I reached Little Jimmy Campground, I enjoyed seeing that a Boy Scout Troop had camped overnight. I’m really looking forward to backpacking this year starting with my upcoming Grand Canyon trip the first week in April.

By the time I made it around the north face of Mt. Islip the snow was essentially gone with only small patches remaining. So, I took off my microspikes until my return.

The presence of at least some snow along parts of the trail without a north facing orientation enhanced the view as I made my way to Mt. Islip.

View from the Islip Ridge Trail. (click to enlarge).

While there wasn’t snow on the trail for the entire hike, there was enough to enjoy and feel like it was more of a snow hike than not. I took my time on this one and savored what could be the last remnants of this unusually dry winter. If we do get another storm soon, at over 6,600 feet in elevation at the trailhead, this trail is bound to get more snow. 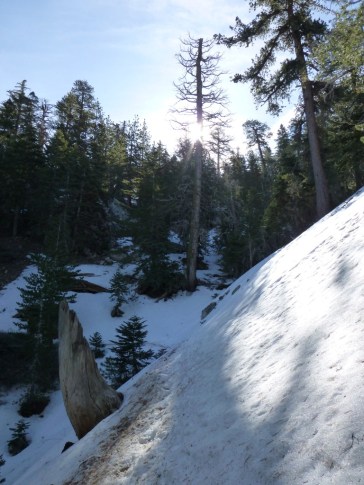 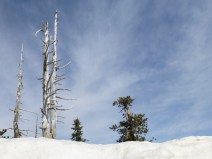 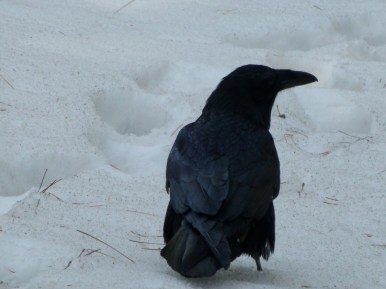