One of my favorite things about hiking is that the terrain varies as the miles pile up.  There are always interesting places along the trail to spend some extra time in.  When I’m training and trying to reach a certain spot and be back at my car before dark, I often don’t take the time to stop and enjoy these wonderful places along the way.  However, when I am exploring, I like to invest the time to enjoy some of the places a trail passes by.  This is the first in an ongoing series to share these places.

On a recent family and friends hike to Mt. Hillyer from Chilao, a mountain biker suggested we climb around and up an interesting rock formation and check out the view–which we did.  The view is terrific and the greenery is made more poignant as nearby the forest is dominated by burn areas.  It’s also fun to take a small break from hiking and do a micro rock scramble–challenging enough to require that one pay attention but easy enough for most to easily accomplish safely.  The rock formation is oriented so that a rock wall blocks the view from the trail.  So, rock scrambling up a short and somewhat narrow path of boulders to then reach the top of a rock that forms a small platform significantly enhances the drama of the expansive view that emerges. The rock platform is high enough off the ground that It feels a little precarious to be there, but not so much so as to be distracting. With the rock wall blocking the view of the trail behind, the place has an intimacy to go along with its remarkable view.

This rock formation is located on the Mt. Hillyer Trail between Horse Flats Campground and Mt. Hillyer.  Since it forms one edge of the trail, it’s easy to spot.

View of rock formation heading down from Mt. Hillyer toward Horse Flats.

To get to the rock platform, climb up between the tree among the boulders and the rock wall. 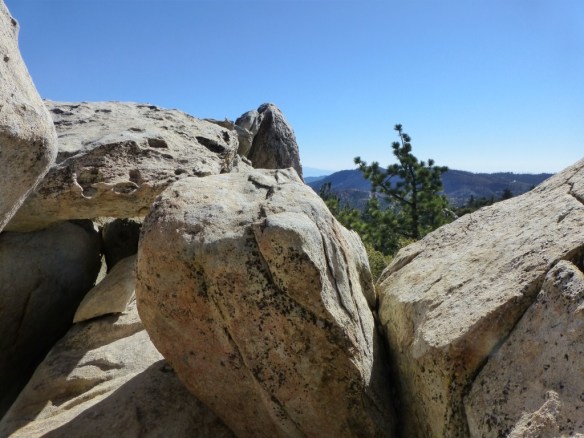 View of boulders to climb on the way to the rock platform.

There is a nice spot to sit on along the way–especially if the last boulder to cross to get to the rock platform is more challenging than you want to attempt.

View of nice spot to sit as seen from the rock platform.

From November 15 through April 1, the Chilao trailhead isn’t accessible by car.  However, another way to get to the Mt. HIllyer trail is to hike the Silver Moccasin Trail to Horse Flats from Three Points.