It might be helpful if more of us (myself included) who post hiking photos or write about our hiking experiences told more stories about when and why we turn back sometimes prior to reaching our planned destinations.

Helicopter rescue getting under way last Wednesday in Icehouse Canyon.

I mention this in part because two people died this past week in Angeles National Forest. The first, Daniel Nguyen, died falling from the Devil’s Backbone Trail near Mt. Baldy last Tuesday. The second, Dong Xing Liu, died falling in the Icehouse Saddle area last Saturday. Lieu’s wife and ten other people were airlifted off the mountain as well. Four of those people suffered injuries including a broken hip and broken ribs. I followed this link from a post from Modern Hiker on Facebook to learn more about one of Saturday’s rescues. Another hiker, Jason, suffered multiple injuries including a fractured skull and eye socket in a fall from Timber Mountain on January 23rd. As far as I can tell that has only been reported on a gofundme page set up by his brother-in-law Andrew (who posted on my Facebook page) and shared on other social media. Last Wednesday, I played a minor role in a rescue where a hiker needed to be airlifted out of a gully in Icehouse Canyon (he had a broken ankle/leg and should be OK). I was merely one of the several people helping the first helicopter locate the hiker. I also helped walk his dogs down to the trailhead after one of the rescuers shepherded them back up the steep mountain from the gully to the trailhead–which there’s no way I could have accomplished. As far as I can tell, that rescue has only been reported on social media by myself and one of the other hikers (Bonnie) who helped with the dogs. I wonder how many other rescues happen that don’t get reported in the popular press. I’m guessing more than I want to know about. I called the Mt. Baldy Visitor’s Center this morning and verified that the Icehouse Canyon Trail is temporarily closed. With great hesitation, the person I spoke with said Baldy Bowl and Devil’s Backbone are still open. However, it appears that has changed. About an hour later the US Forest Service posted “Be Advised: Until further notice, all Mt. Baldy Trails have been closed due to icy conditions and severe risk of injury.” 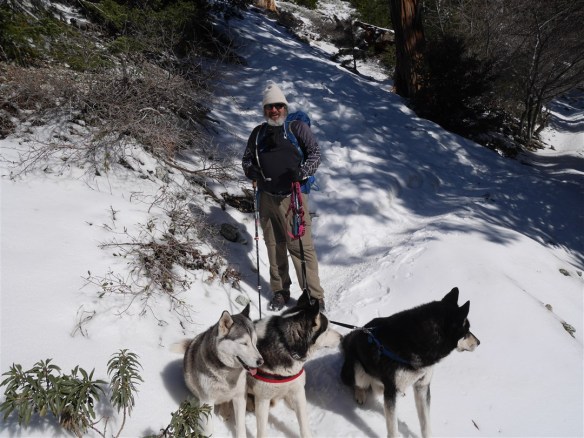 Of course, there’s a lot of criticism floating around on social media. Criticism of the hikers, criticism of the Forest Service for not closing the trails down sooner and also for closing them down at all–the Forest Service really can’t win on that issue. I’m not interested in those discussions. Daniel Nguyen died trying to help someone else. People fall on dry flat perfectly maintained walkways wearing appropriate shoes all the time. I’m thankful I’ve never needed to be rescued but that doesn’t mean I won’t no matter how reasonably cautious I think I’m being. To those who’ve been so critical and condescending, the story of Ranger Randy Morgenson’s death in the High Sierra’s might help slow down a desire to judge and spew out pronouncements. Also, I wasn’t part of the decision-making process the Forest Service used to temporarily close the trails. Without being part of that process, I don’t know all the issues they were dealing with when they decided to make those closures.

Help came quickly with hiker’s Anthony and Bonnie ending their hikes early to help me bring the dogs down. Two members of the forest service (who were great) met us partway down and helped as well.

I rarely see first-hand accounts of people deciding to turn back earlier than planned on a hike. I certainly don’t write about that every time I decide to turn back at an appropriately early time for me. My turnaround point may be too early or too late for others. However, sharing my decision-making process may help others think through when they might want to choose to call it a day. At the same time, I’d like to underscore that unavoidable accidents do happen. Sometimes a slip is just that; no amount of preparation, gear choice, or reasonable level of caution would prevent it.

I had already hiked to Mt. Hawkins in snow before on November 9, 2011. Note the post holing track I left on my way up. No sinking into the icy snow occurred on my way up to Windy Gap on this year’s attempt.

I’ve been on three snow hikes this year. I’ve needed to turn back early on two of them–one was last Wednesday when I turned back just above the junction with the Chapman Trail. On January 25th, I headed up the PCT expecting to go to Mt. Hawkins, microspikes on, using my trekking poles, and carrying snowshoes in my backpack. I had already hiked up to Mt. Hawkins in the snow back in November of 2011 and thought this would be a perfect day for a repeat trip. 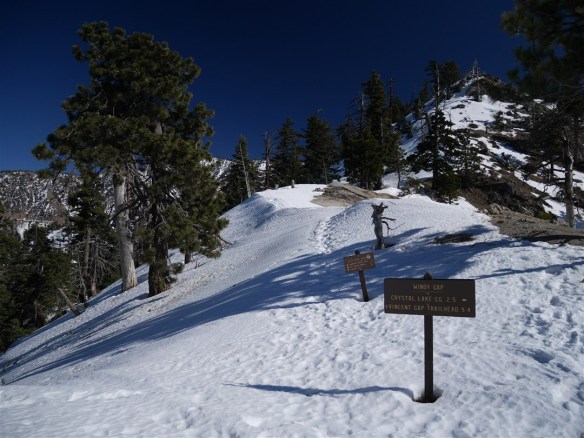 The view from Windy Gap looking up the PCT in the direction leading toward Mt. Hawkins.

Heading up from Islip Saddle, my microspikes worked great, the trail was comfortably wide for me, and it was a gorgeous day. By the time I got midway between the lower junction with the road to Little Jimmy Campground and the campground itself, the trail began to narrow. Frozen postholes and other clues showed the snow to be over a foot deep in some areas. However, the hard icy conditions prevented me from sinking in. I had never been in conditions like that before. My previous experience with snow that deep meant it was time for the snowshoes because I’d be sinking in. The narrow flat ledge remained wide enough to remain at a reasonable distance inside the edge of my comfort zone. At my skill level, though, I needed to be laser-focused, paying attention to my feet instead of the fantastic views around me, and go real slow in many places. When I reached Windy Gap, I wasn’t physically tired or winded at all, but, I was starting to feel mentally drained. The view up the PCT looked like something I could handle physically. At the same time, I knew there would be lots of areas where I’d need to be super focused mentally and I wasn’t sure I’d be up to the task of doing that. The presence of tracks indicating others had made it higher up didn’t matter, the fact that I had made it as far as Mt. Hawkins in the snow in the past didn’t matter. What mattered was how I felt at that moment, and I felt a little apprehensive. I was concerned about the icy conditions and whether or not I’d know in time if I got too tired to maintain the focus required to descend safely. Unlike the snow that gives, allows one to sink in, and slows one down; this icy hard stuff meant one small slip and I could find myself accelerating down the mountain. 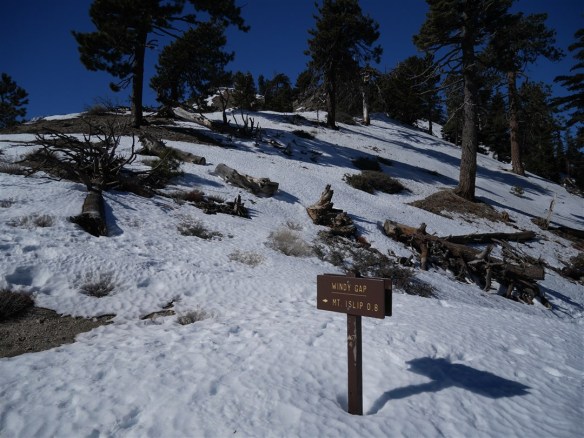 The view from Windy Gap looking toward Mt. Islip.

After deciding not to go to Mt. Hawkins, my attention turned to Mt. Islip. I wasn’t ready to be done for the day and I’d seen a few photos on Instagram of people who had recently made it to Mt. Islip. Well, there wasn’t any form of ledge or trace of trail present. That may be no problem for some people better trained and more experienced than I, but I need some form of a trail/ledge or I feel too unsteady to move forward. So, that wasn’t an option. I sat on the bench, ate lunch, enjoyed the view and got ready to focus on making it down from where I was. 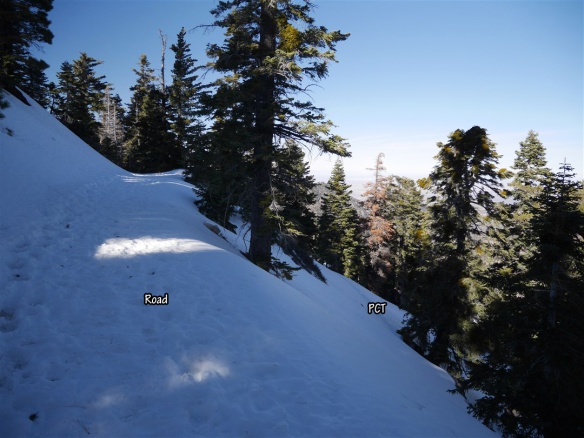 The road to Little Jimmy running just above the PCT.

By the time I got to Little Jimmy Campground, I decided I needed another break mentally. This reinforced in me that I made the right decision back at Windy Gap. The trek down from Windy Gap wasn’t even that tough, but, I recalled most of my need to achieve laser-focus was between the campground and the junction with the road. Then I thought about the fact I had never taken the road before. Surely it was wider and much safer. What a relief, the road was perfect. I could just relax, enjoy the rest of my day, and not worry about a few patches of thin and icy trail. From above, I was surprised to see how close the road follows the PCT as I looked down on it. In many ways, it’s just a wider version yielding almost identical views. This road would be great for snowshoeing on another day. In fact, I can’t imagine a scenario where I will take the PCT instead of this road up to Little Jimmy in the snow in the future. A key thing I’ll remember moving forward is the sense of relief I felt when I got to the road. While I know I would have turned back on my way up the mountain if the trail disappeared or got much narrower on the way to Little Jimmy Campground, that sense of relief made me realize the importance of tracking my mental tiredness–especially in areas where there is no real margin for error. How many times have I turned back later than I should have and just got lucky? How would I even know? Accidents happen where there’s nothing one could have done to prepare and there’s nothing one could really do differently (which is why I carry a device that can send messages for help via satellite and $100K of search and rescue insurance). Knowing when to turn back on a hike is a fundamental part of hiking that we hikers should also be training for. I hope other’s will share their stories of turning back as they may provide some inspiration for this form of training as hike reports do in finding trails. One person’s accident is another person’s bad decision making and vice versa. I think there are too many factors to judge whether something is a misfortune or a mistake from afar and that there’s really no point in doing so. It’s up to us to determine what we shouldn’t do. Lot’s of people could have easily made it to Mt. Hawkins on the day I clearly shouldn’t have tried. I’m happy I turned back!