My absence from hiking mercifully came to an end last Sunday (11-1). I’ve been away for a variety of reasons. However, being tethered to the city was mostly a result of the process of selling our house and moving into a fixer which my wife and I are finally somewhat settled into. My long hiatus was in many ways an emotional roller coaster that thankfully ended in a place my wife and I want to be in. For my first trip back into the forest, I wanted to go alone, proceed at my own pace, stop to look at whatever caught my eye for however long I wanted to, and just enjoy being in nature without any other agenda. I also wanted the hike to be one I’d find easy to do and to have a midpoint at a great spot where I could comfortably have a long lunch break, enjoy great views, and relax alone in the woods.

One of many pauses to take a moment and enjoy viewing elements in the landscape. I like looking at the interplay between light and shade when looking at a tree’s canopy from below.

It would be easy to select a hike with those requirements on a weekday. However, for a Sunday hike I needed to really think through where to go to get the experience I wanted. Between Three Points and Cloudburst Summit (around mile marker 54.10 on Angeles Crest Highway), there’s a large parking area with picnic tables and toilets. Passing by often and rarely seeing any cars parked there, I decided to make that my starting point. 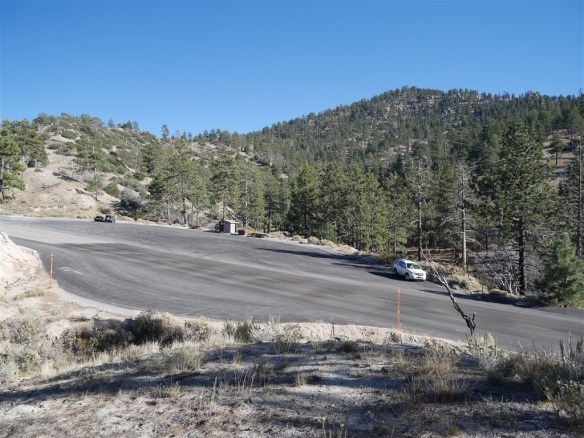 View toward parking area near mile marker 54.10 on Angeles Crest Highway from the Pacific Crest Trail. Mt. Waterman is in the background.

Near the parking lot (in the direction toward Three Points) is a little-used access point to the Pacific Crest Trail. There’s actually one of those thin brown signs marking the trail that is easily missed when driving by. I never noticed it until I hiked from Three Points to Winston Peak last year. 1 After a very short initial portion of mild gain, the trail has a gentle slope. A portion of it is a still driveable dirt road leading to Camp Glenwood. From Camp Glenwood, the trail contracts and widens in width due to it being a former road that is no longer maintained. 2

The current state of the former road (that is now part of the PCT) between mile marker 54.10 and the next crossing of Angeles Crest Highway typically feels more like a nice trail than a road.

Normally, I wouldn’t be enticed to go on a hike that requires much walking on a dirt road. However, in this case, there are great long views down Cloudburst Canyon and toward Mt. Pacifico, Winston Ridge, Winston Peak, and Pleasant View Ridge that are mostly blocked from view when driving along Angeles Crest Highway. In most places, the terrain feels more like a trail than a road, the pines and cedars provide a lot of shade, and there are a few spots with some nice rock outcrops.

Most of the way to Cloudburst Summit is gentle enough in slope that my out of shape cardio wasn’t anything I was conscious of. I enjoyed the easy stroll stopping numerous times to glance up at a tree, take in a view, or to sit on a rock and have a snack. After crossing Angeles Crest Highway to continue on the PCT, the views of Mt. Waterman and across toward Strawberry Peak become dominant.

View toward Mt. Waterman from the PCT near Cloudburst Summit.

I felt energized when I reached Cloudburst Summit and the trek up to Winston Peak went easier than I expected. When I reached the peak, it felt like I was there too soon. I wasn’t ready to be halfway done and have lunch. Fortunately, this peak is one of my favorites 3. It is heavily wooded with an abundance of rock outcrops connected to reasonably flat spots that could make great campsites. Since my first summit, I’ve wanted to explore these areas below and around the peak. It was wonderful to finally have the time to do so. I probably spent about an hour and a half exploring some of these areas and having lunch.

One of my favorite views from one of the hilly areas with boulders and potential campsites off the trail near Winston Peak.

The trek back went quickly. The views coming down from the peak directly toward Mt. Waterman or further out toward Mt. Baldy are among my favorites. I like the spacing of the trees, the long views, and the almost continuous presence of boulders as the trail alternates between being somewhat steep and merely hilly. The hilly parts of the terrain hint at places to explore in the future and yield a sculptural quality especially when combined with the many boulder formations. I wasn’t very tired when I reached my car. What a relief to know I’m not as out of shape as I feared. I also got my wish and didn’t see anyone. I look forward to taking it up a notch this Sunday.

My lunch spot where I enjoyed the view toward Mt. Baldy