My daughter and I had a great time on our first road trip with her doing most of the driving. We went to Sequoia, camped at Upper Stony Creek Campground, and hiked the Congress Trail and a few short extensions in Giant Forest the next day. I was in Giant Forest snowshoeing in January and knew it would be a fantastic first trip. The major factor for the hiking component of our trip was to go to a place with phenomenal scenery that did not require a lot of effort to traverse because it was my daughter’s first hike in a while. Our hike of only about 3 miles and 450′ of gain over a mostly paved trail was interestingly diverse for such a short stretch of trail and intensely awe-inspiring. Within the first half mile we came upon the General Sherman Tree–the largest tree in the world (by volume).

General Sherman Tree (notice the people at its base)–click to shrink image to your screen size.

It is hard to convey the size of Giant Sequoia trees (which is why I sized the above photo the way I did). Unlike a skyscraper where one can usually see the top of the building from close by (often from a few feet in front of the entry), the branches and leaves of these trees prevent one from seeing the tree top from anywhere near its trunk. As a result photos looking up from the base of Giant Sequoias usually capture half or less of the tree’s height. Trying to internalize their size is an exercise in viewing them from multiple distances and angles in order to both get far enough away to take in their overall form and close enough to tangibly experience a direct relationship of the size of at least one small part of the tree to oneself.

Kyle sitting on the Chief Sequoyah Tree. Photo by Sarah

Sarah inside the base of the Lincoln Tree.

One of the signs along the trail states that “the largest sequoias in this area are between 1,800 and 3,000 years old.” Wrapping our minds around the reality that these giant objects in the landscape are actually alive and thousands of years old is something I think we are still working on. Sarah pointed out that these trees remind her of the Ents from Lord of the Rings. That they are living and so old feels more like something from science fiction or fantasy than something we could actually touch. Standing next to one of the larger sequoias and imagining that it was alive before I found myself thinking about history and the fact that the older sequoias lived through it (granted they didn’t “witness” anything outside the grove they live in) and how different that is than the presence of inorganic objects on our planet that are just as old or older. 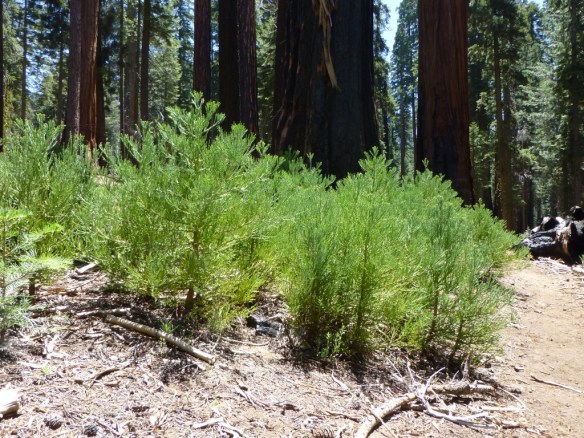 Young sequoias with giants looming large in the background.

With sequoias ranging in age from less than a year old to thousands of years old, the texture of the forest is fascinating to behold. There is a tangible history to it.

Texture of Giant Forest. (Note the people standing next to a fallen giant with a comparatively young sequoia growing out of it).

One of the signs along the trail point out that the sequoias “thick fibrous bark provides superior insulation against fire. With little flammable sap, it doesn’t burn easily”. These trees do get hit by lightening which is far more likely to scar them than burn them to a crisp. The likelihood of the older trees being hit by lightening at least once in their life is high enough that there are numerous trees that are still alive but also have significant features associated with surviving such intense strikes. These features were often something to marvel at as we made our way through the forest. 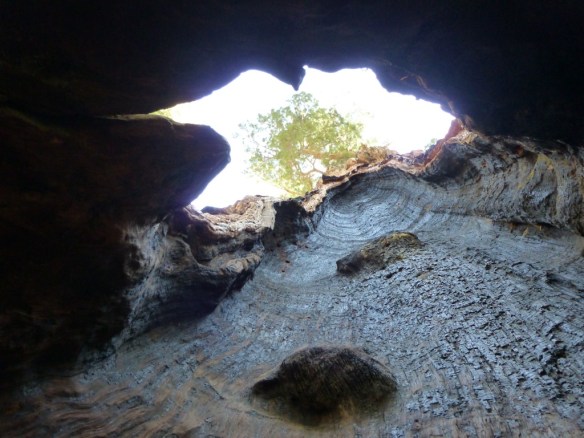 View up Chief Sequoyah standing inside a hollowed out portion of its trunk.

There really is a lot to look at. For a while, Sarah became fascinated with the surprisingly small sequoia pine cones and enjoyed looking for and admiring the most perfectly shaped ones and sharing them with me. Hard as it was to do, we resisted breaking the rules and taking any home with us.

Pine cone of a Giant Sequoia

We didn’t see many creatures during our trek but we were fortunate to come across a marmot hanging out on some boulders.

Of course I took more photos along the Congress Trail and am looking forward to returning to Sequoia in July.

16 thoughts on “Giant Forest With My Daughter”