Hiking has taught me to pay more attention to the weather.  As of last Sunday, I’ve now internalized the reality that there are numerous days in the year when I can decide what weather I want to be in.  Living within an hour of both the Pacific Ocean and trailheads leading to peaks as high as Mt. Baldy’s 10,064 foot elevation yields opportunities to take advantage of elevation differences.

Last Saturday, I went on a family and friends hike.  My wife and I left our house under cloudy and misty sky’s.  We didn’t see an blue skies or the sun until we were partway up Mt. Baldy road.  By the time we made it to Icehouse Canyon to start our hike, we were out of the clouds and into clear sunny skies.  Coming down the Chapman Trail allowed us to see out of the canyon and view the cloud cover that most people in the LA area remained below for the day.

View of cloud cover down Icehouse Canyon with Mt. Wilson and San Gabriel Peak off in the distance.

On Sunday, I woke up to the same weather.  The ground was wet and the air was misty with clouds as far as I could see.  Initially I was disappointed as I had planned to play paddle tennis with my cousin in Marina Del Rey.  The weather report showed 30% chance of rain and I decided it wasn’t worth the risk to drive out and have the courts become unplayable after a few minutes of rain.

At that moment I finally realized that staying below the cloud cover could be a choice instead of a situation I had no control over.  I walked to the end of my block and looked at Mt. Lukens.  The clouds were low enough covering half the height of the mountain that it looked possible that I could get above the clouds again as I did the day before.

So, I set out to go on a short hike to San Gabriel Peak where I had once unintentionally found myself above the clouds before and it was one of the peaks that were above the clouds the day before.  Driving up to Eaton Saddle, I found myself in the clouds and either in mist or light rain.  I drove higher up to Mt. Wilson only to find it was also still in the clouds.  Admittedly, this reality was humbling.  Perhaps I didn’t have a choice after all.  Fortunately, I continued up Angeles Crest Highway and by Newcomb’s Ranch I found myself in the sun.  Having only brought a small snack and water for a short hike, I settled on hiking the Mt. Waterman Trail.

At the trailhead, it was completely sunny and clear.  However, as I followed the trail heading east up the mountain toward the Kratka Ridge, I started seeing a light mist as the clouds were just making it over the Ridge. 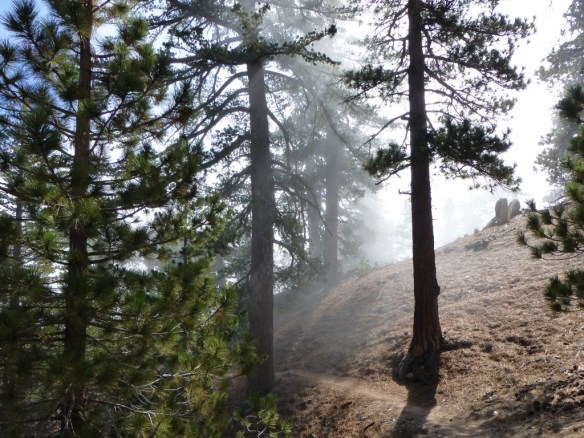 A light mist of clouds making it’s way over the Kratka Ridge.

I thought that it was possible that I wasn’t so much above the clouds as I was in front of their path over the mountain range.  So, I picked up my pace trying to make it up to the summit before clouds had a chance to overtake it.  It didn’t take long after the trail changed direction and for me to reach high enough ground to find myself once again in the sun.

Back in the sun looking across the cloud cover toward Mt. Baldy.

With clear skies at the summit, I enjoyed the uncommon opportunity to stare both up at a cloudless sky and across the cloudscape. 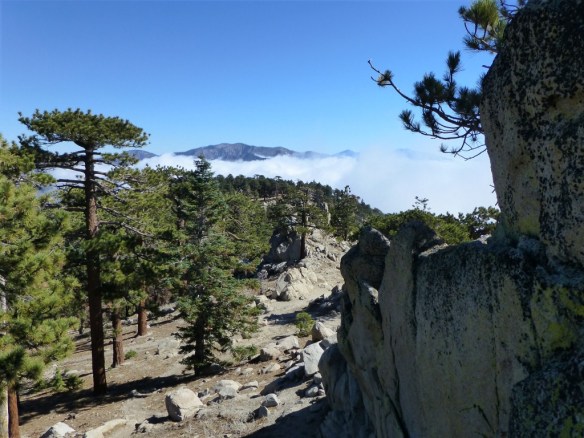 View from Mt. Waterman toward the east and across the cloudscape toward Mt. Baden-Powell 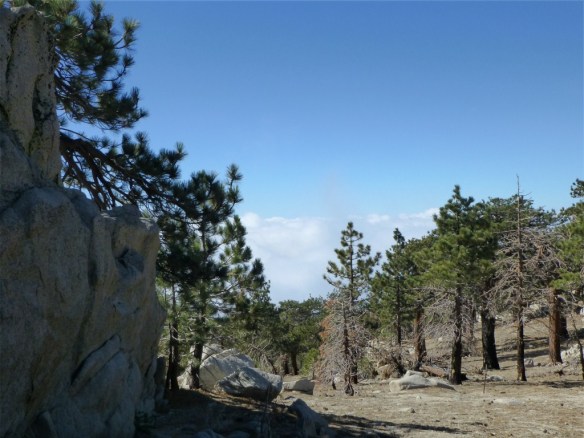 Looking toward the west where nothing is tall enough to rise above the cloudscape as it makes it’s way over the mountains.

Making my way down toward my car found me inside the clouds as they made their way over the Kratka Ridge.  This suggested to me that earlier I was at times both over and in front of the clouds as they moved north.  Along the way down the mountain I felt a few drops, but mostly just some mist.

In the clouds only a couple hundred feet below the summit.

Once I got to the point in the trail that I started heading back west across the north face of Mt. Waterman, I found myself exiting the clouds.

Back in the sun and clear skies along the north face of Mt. Waterman.

On the ride home I thought about how liberating it felt to be able to decide what weather I wanted to be in for the day.  Playing around the edge of the clouds, being just above them, just in front of them, and at times inside them or under them (at home and on the way to and from the trail) made for a wonderfully dynamic day.