Along with Tim, Scott, and Dave, I made it to the summit of Mt. Whitney.  It was a wonderful adventure jamb packed with stunningly beautiful landscapes of a grandeur I’ve not experienced before.  My training (mostly in Angeles Forest) served me well.  The altitude didn’t bother me and I was able to fully enjoy being on the summit.  That said, there were a couple moments where I had my doubts concerning whether I would make it.  Those moments I will share in future posts.  For now, I mostly want those who have been following my progress to know that I made it to the summit and am back home.  Since I’ve already mentioned that I made the summit, I’ll tell that story here and leave the others for later.

It was exciting to make the turn in the trail that took me from walking up the side of the mountain to being on top of it.  Most of the last couple miles had been along a narrow ledge trail mostly covered with ice and snow with a drop of a couple thousand feet on one side.  There was no hiking while looking at the views for me.  I had to stop in order to check out a view because I needed to focus on almost every step and use my trekking poles to insure I didn’t slip.  Now, on top of the mountain, the path up yielded plenty of room for minor error and required far less focus to negotiate.  The sun was no longer blocked by the side of the mountain or the “rock towers.”  To be comfortable, I now needed to switch from wearing my glasses to my sunglasses and put on my hat.  As I took off my backpack and made those changes, I knew this was the last thing I’d need to do before making it to the summit.  The view up indicated that the rest of the way would be easy. 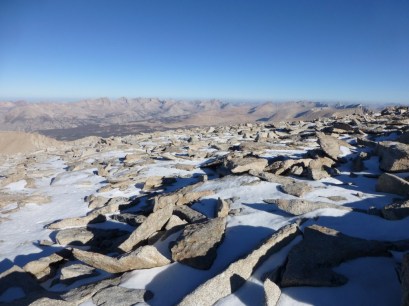 Now able to think about more than putting one foot carefully in front of the other, I was able to reflect on what I was seeing and where I was hiking.  Now on top of the mountain, on wide terrain, with nothing blocking the view on either side or looking back, and the only remaining natural feature essentially an inclined plane of jagged granite all the way to the peak; my thoughts turned to geologic time.  This far above tree line the landscape was essentially granite and water.  The texture (not the height or overall shape) of the plane I was walking up entirely the result of weathering processes over many thousands of years.  The delineation of large rocks and larger slabs of granite were not the result of breaking apart in a rock slide.  There was no longer anything above for them to fall from.  This amazing texture I was walking through was not the result of a single event or of a few events.  This texture was created over millions of events like the summer snow storm of the previous afternoon.  Water working its way into cracks, expanding and contracting as it freezes and thaws making the cracks larger, and chemicals in the water reacting with minerals in the granite slowly eroding the rock.  Dry surfaces of granite jutting out from the blanket of snow asserted their relative imperviousness to the weathering processes that were to greater impact the areas that were still covered.  Granite, water, weather; it felt primal.

The summit is spectacular.  The precariousness of walking over angled slabs of granite anywhere near the edge of the summit intensifies the sense of high elevation.  Views in all directions are as far as the eye can see.  Perched up at 14,505 feet, the highest point in the lower 48 states, a stunning 360 degree view is to be expected.  More than that, it’s the nature of the terrain and how the views unfold that makes this summit spectacular.  Within a mile or two (as the crow flies) north, south, and west is a valley floor some 3,000 feet down with tarns and/or lakes.  That alone would be amazing.  However, beyond these valleys are mountains another mile or two away with peaks some 2,000 feet above the valleys, but around 1,000 feet lower than Mt. Whitney.  So, I was able see over those mountains using the distance between the Whitney summit and them as a visual reference to sense the distance of terrain I was seeing beyond (which doesn’t photograph well due to the multiplicity of focus points).  The large patches of green that were tall trees of forest off in the distance appeared to be flat as grass on a prairie.  This gives a great reference for viewing east all the way down to the Owens Valley some 10,000 feet below and across to the White Mountains.  Looking any direction and then east magnified the sense of height.  The grandeur of it all was easily seen and felt.

Sitting down and having a snack I began thinking about the weather.  We hiked up early to avoid a potential storm like the one the day before (and apparently every day for about a week prior to that).  Off far in the distance clouds were starting to form.  I didn’t want to end up like hikers the day prior that got caught near the summit in a snow storm featuring lots of lightening.  The hikers I spoke with found the trek down terrifying.  It felt like time to go even though I wanted to stay longer.  Walking down the summit approach, looking toward the Great Western Divide I think I perceived the curvature of our planet.  Maybe that’s just the altitude talking, I’m not sure.  Not even a tenth of a mile down from the summit, I was missing it already.  Looking west, all I could think about was how I wanted to know what it was like to come up from that direction.  I imagine that starting in Sequoia or Yosemite would be phenomenal.  Thoughts of the High Sierra Trail and the John Muir Trail filled my head.  I don’t just want to come back.  I think I need to!